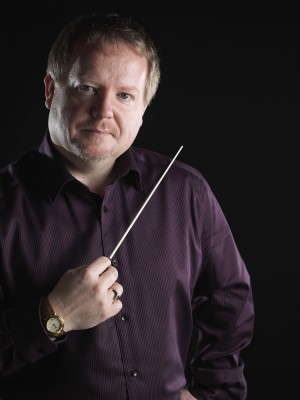 Russell Gray’s career as a conductor began in 1998, when he was appointed as the resident musical director of the Stavanger Brass Band (Norway). Since then his reputation as an authoritative interpreter of brass band music has been acknowledged at home and aboard. Since 2008, he has been principal conductor of Molde Brass Band (Norway) and is Adjunct Professor of brass at Queensland University (Australia). Russell has enjoyed considerable success within the world of brass band competitions with leading ensembles in Norway, Denmark, Finland, France, Switzerland, Japan, New Zealand, Australia and Switzerland. Russell enjoyed periods as the principal conductor of Foden’s, Fairey and Leyland brass bands and since 2012 has been principal conductor of Reg Vardy Brass Band, the leading band in the North of England.

A proud Scot, Russell was born near Glasgow, and came to prominence within the world of brass bands as a cornet virtuoso. During his student years, he was a member of the world famous Black Dyke Band and went on to enjoy a number of years as principal cornet of the Leyland Band. He has also produced six solo albums, including two acclaimed releases featuring historic cornet repertoire from the celebrated Arban collection of solos and studies.  Russell is a Yamaha endorsed artist and is much in demand as a leader of workshops, clinics and seminars. He also leads Yamaha’s star-studded NEO Brass Ensemble.

He has appeared to great acclaim at the Royal Albert Hall (London) and Symphony Hall (Birmingham) to the Grieg Hall (Bergen), Stravinsky Hall (Montreux) and the Sydney Opera House.

He is a recipient of the prestigious Iles Medal of the Worshipful Company of Musicians in acknowledgment of his outstanding services to the brass bands.